What the Packet Cavalry Does

Why We Use Packet and Winlink

Packet is a form of amateur radio communication that provides error free transmission of digital data.  As the term packet implies, transmission exchanges are done in short bursts of binary data.  Each packet contains error detection and correction bits sent with a short string of data.  Further technical description is beyond the scope of this document.  The interested reader is referred to  Introduction to Packet Radio

The need to communicate information error free is essential in emergency situations.  For efficiency EMCOMM data transmission is supported in the form of conventional e-mail, spreadsheets, and Incident Command System forms using a worldwide service called Winlink.  Winlink provides a connection to the internet through Radio Message Server (RMS) stations.   It can also be used for point to point data exchange.  For details see https://winlink.org/

What are the Objectives of the Packet Cavalry

How to be a Packet Cavalry Operator

Add Packet capability to your Station

Two basic ingredients are needed to operate Packet:  a personal computer, and a 2m transceiver.  The personal computer can connect with and communicate digital data with other 2m Packet stations by interfacing it with the transceiver.  The digital data must be converted to two tone audio sent and received by the transceiver using narrow band FM; the same modulation used for voice.  The interfacing between the PC and the radio is done by a Terminal Node Controller (TNC) which can be either a hardware device or a software program on the PC.  Figure 1 illustrates a typical configuration for hardware TNC.  Likewise Figure 2 shows sound card to radio connections for software TNC.  Purchase of hardware TNC provides a more “turnkey” solution to get on packet.  Operator’s comfortable working with PC software often finds the software TNC approach attractive and economical.

Some typical hardware TNC’s are available:

These 3 TNC types have been available and in use by many hams for a number of years.  Other and newer models are available.  Some facilitate other modes.  Talk to experienced packet operators and do some web searching before making a purchase.  The TNC you select should be one listed on the Winlink Express packet setup menu or operate in KISS mode.

The TNC distributors generally also sell the required cables for many radio models.  Most transceivers now come with a standardized 6 pin mini-DIN connector for connection to a TNC or sound card.  TNC’s that have a serial interface require a USB to serial interface cable.  Make sure a driver for Windows 10 or your appropriate operating system is available before buying one.

TNC units and interface cables are often available at Hamfests and on swap lists.  These may provide a low cost approach, but as for all used equipment purchases caveat emptor (“let the buyer beware”).

Installation and use of Winlink Express

The WC-ARES software application of choice for EMCOMM digital communications is called Winlink Express.  Reasons for this choice include sending and receiving E-mail with or without attachments, plus the application supports the entry and sending of Incident Command standard forms.  Step by step guidance on the installation and basic use of the Winlink Express program is available in Greg Fuqua’s presentation slides at http://dev.wc-ares.org/2019-ares-winlink-training/

New operators are encouraged to read about Winlink at https://winlink.org/

The Winlink Express application is available free on the web at

Where to find Information on Local RMS stations

A listing of RMS stations in the ARRL South Texas section is available on the web at: http://n5tw.ecpi.com/rmsstatus/

This comprehensive list includes status information on which stations are “up” and functional.  The testing method used to generate this report is internet based.  Basically it shows whether the computer for each RMS station is responding.  If it shows “down” the station is non-functional.  If it shows “up”, it does not guarantee that packet radio connection is functional.  However, experience shows that occasions when stations are “down” when reported “up” are rare.  The list also includes additional useful information such as frequency, location, facility, digipeater, and e-mail addresses.

How to Participate in the Packet Cavalry

There is no formal membership in the Packet Cavalry.  Most participants are members of Williamson County ARES, but this is not a requirement.  Hams in Travis, Burnet and other counties also participate.  Participation is simply the testing of local RMS stations by making on the air connections to them.  Successful connections and RMS station outages are reported to a WC-ARES member who serves as the Packet Coordinator.  He/she reports outages to the hams who maintain the RMS stations.  The Coordinator also sends a summary report of the testing activity weekly to the WC-ARES EC. Our served agency, CATRAC also receives reports.

There is no requirement as to the degree of participation.  Checking one station a week will give you some on-going practice with packet and Winlink.  Some operators do one check-in a week. Some only occasionally find time.  Some operators check a list of 15 or more stations every week, while a few participants do 100 check-ins or more a week.  Do what your schedule permits.  Every check-in is appreciated and valuable to WC-ARES and CATRAC.

In order to make efficient use of their time in performing RMS station tests, Packet Cavalry operators usually begin with a Telnet connection.  This will very quickly download any pending Winlink e-mail coming to you.

Send Packet Cavalry report e-mail to Don Eddy, AA5DE@winlink.org, and CC Dick Foster, W5TA-1@winlink.org and Terry Jones, K5LGV@winlink.org.  Don generates a spreadsheet report each week.  A list of the Cavalry participants for the week is published on the WC-ARES Members reflector.  A listing of local are RMS station status is also posted on the reflector.  The report period is from Sunday evening 8:00 PM local time to 8:00 PM on the following Sunday.  A brief summary stating the total number of RMS station checks, and the number of Packet Cavalry operators participating is given as an announcement during the weekly WC-ARES Training net held at 8:00 PM local time each Sunday on the 146.64 MHz WCARC repeater.

Packet Cavalry members submit their reports to the Coordinator using either of these methods:

Members who only have time to check one or a few RMS stations typically use the single station report.  Operators who test a more extensive number of stations usually submit a single e-mail to the coordinator listing the stations tested and the test results (success / failure).

The single station report is usually sent through the station tested.  The example described below is shown in Figure 3.

W5TA creates an e-mail as pictured below, puts it in the outbox and then connects with the Round Rock Medical Center (RRMC) to send the e-mail.

On the Winlink Express main window select “Message”, then click on “New Message”.  This opens the “Enter a new message” window.  Fill out the e-mail TO:, CC:, Subject:, and body:

Notice that all the relevant information the Coordinator needs to log is contained in the subject line.  It is important that the subject line contains the station tested, in this case RRMC.  Rather than the location acronym (RRMC) the RMS station SSID, WD5EMS-10 in this case, may be entered.  A signature is put in the body just to prevent a “no text” error from the Winlink application.

After filling out the message window, click on “Post to Outbox”.  Be sure to have your transceiver on the right channel, open a packet session and enter the correct RMS station SSID in the text box to the right of the “Connection type:” selection.  Then “Start” to send the e-mail.

If the attempt to connect to the RMS station fails, inform the Coordinator by sending an e-mail reporting the outage. This e-mail may be sent through another RMS station or via Telnet.  Include a description of the type of failure.  Common failure types are listed below in the section on multiple station reporting.

Since most of the information in the report e-mail is standardized, you can save time by using a template.  Figure 5 shows a template that will create an e-mail like the one in Figure 3.  Note that, in addition to the “TO” and “CC” fields being filled in, the template also puts the current date in the subject line.  All you have to do is to replace the ??? in the subject line with the identification of the RMS station you are testing.  This is very important because the Coordinator needs to know which RMS station you are testing, so it can be logged on the Packet Cavalry Report spreadsheet.

When you connect with an RMS station, the packet window displays status information on the progress of the connection.  Internally created Winlink message ID character strings are displayed for incoming and outgoing e-mail.  As you become familiar with this sequence of cryptic statements (see example in Figure 4) you will note that the exchange always includes a line with FF followed by a line with FQ.  The only exception to this is that when the connection is marginal the FQ may be missing.  Often the Packet Session window will report a “time out” when this happens.  This situation implies that the RMS station is up, but the connection to your station is probably too weak for practical exchange of e-mail.

The appearance of the FF and FQ lines are used as an indicator that the connected RMS station is up and ready to send and receive e-mail. To do a multiple station report, an operator works from a list of the RMS stations to be tested.  A connection is attempted with each station.  If the FF/FQ sequence is observed the station is designated as “up”, otherwise it is down.  After checking a group of stations, the Packet Cavalry operator sends a single e-mail to the Coordinator reporting the list of stations tested and their status.  See Figure 6 below.  On the “down” stations, the nature of the failure should be reported.

There are several common failure modes:

There are other less common failure modes.  In any event, report what you observe to the Coordinator.  It will be helpful in diagnosing the problem.

The Figure 6 report example appears on the next page. 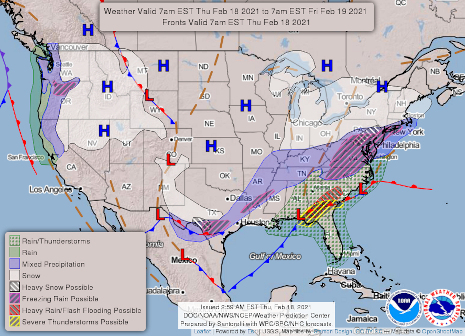 Your 5-Day Forecast at a Glance

Sign up now to give 9-1-1 the information they need to help you fast.

Williamson County Alerts
There are currently no active weather alerts.

Most Sought After Links